A new year, a new finger food that doesn’t involve toast or crackers or bread. It’s like I took the words out of every single human being’s mouth. And so far, 2013 has been the year of the tapenade and finger foods. Why didn’t I eat tapenade in 2012? Was 2012 a bad year for tapenade? A bad vintage?

Well, just like I tell anyone I knew in high school, forgive and forget. And make a really good vegan finger food. I don’t always include that last part when atoning. But I may start.

This is a long one, folks. You can either be in it to win it or jump to the recipe and pretend that’s your new years resolution. You’re doing it!

getting into diptychs in a big way.
I heard they’re a gateway to triptychs.
And that shit’ll get you high/put three photos together.

And when you put that tapenade on a slice of cucumber with a polenta cake, half a grape tomato and roasted yellow peppers, well then, my friend, then you have a gala. 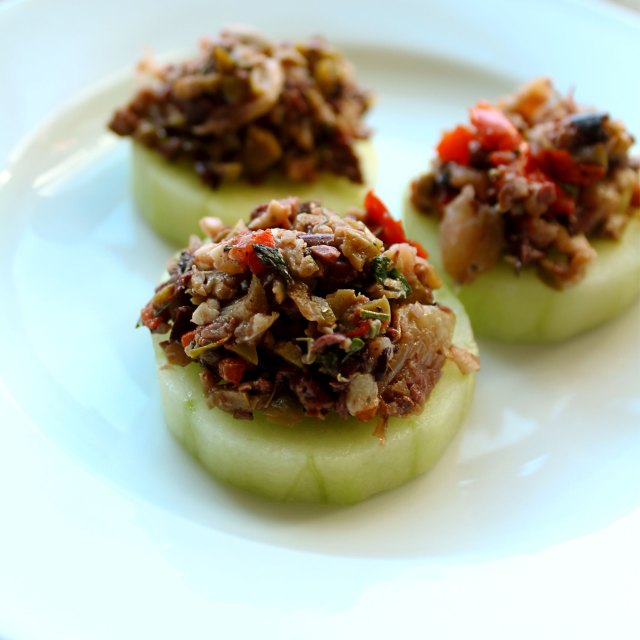 I did this little photo shoot before going to work.
Breakfast was a weird time.

So you’ll forgive and forget this post, right? Ps I’m so sorry for high school.

when you work at a big department store, you can say, “Hey, I’m going upstairs to buy some trendy appetizer spoons,” with only minimal looks.
Mostly they jealous. Yo.

A word about FENNEL TAPENADE and POLENTA CUCUMBER BITES…

Hey, are you interested in learning the definition of “a rude awakening”? Like the back-of-the-flashcard-study-group definition? Here it is: polenta is corn grits and I am dumb. Corn grit? Polenta is corn grit? Singular words that are also known by plural words are enough to blow my damn mind.

I feel like my whole life is a lie.
Classic reaction to polenta.

Anyways, here’s the ish. I dislike grits so much that they almost make me mad. I make a point of frowning down upon grits. Grits are right up there with bigotry and falling down the stairs as shit I really fucking hate. They are straight up useless and weird and grainy.

But I love polenta. Always have. Even from ages 7-15 when I used to confuse the word with “placenta.” Not the same thing, btw. That was a weird time in my life. 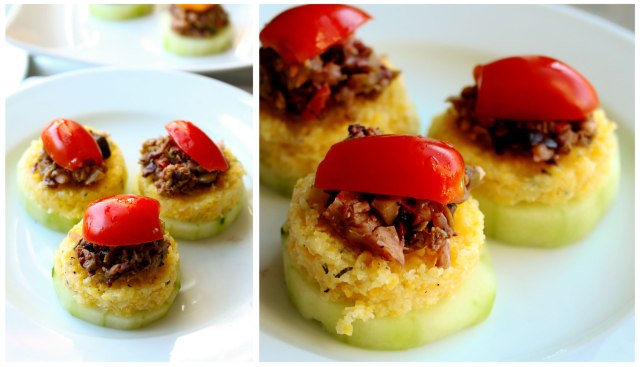 I’m going to keep pretending polenta isn’t corn grits just like I pretend to be a people person.
(Not convincingly.)

So, I mean, fuck. Right? I know the textural aspect of corn grits and polenta cakes is physically different and it’s the texture of grits I hate the most so there’s solace in that. But It’s time to suck up my pride which coincidentally is defined as “sucking up some corn grits” so here goes nothing. Lets start small…

Finger food time! Polenta and tapenade bites, folks. Delicately placed on a plate to impress your friends and help you get over this polenta/corn grits tragedy. 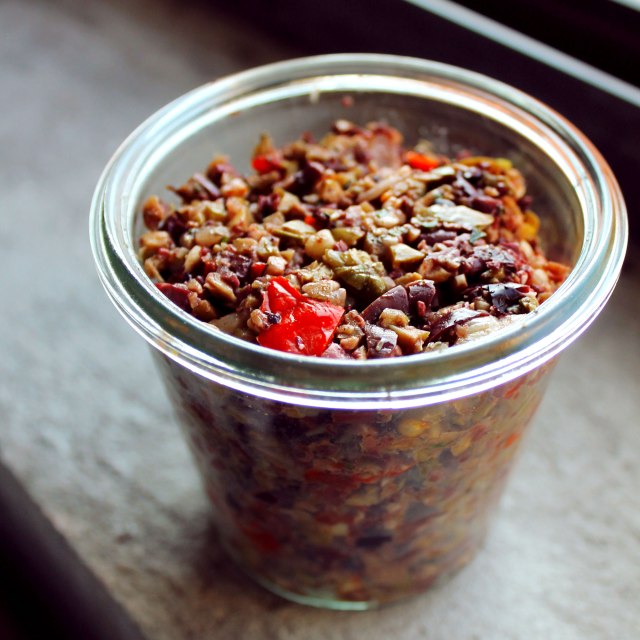 Thank goodness I bought a jar to make homemade jam in so I can put all the homemade jam I’m always making in it.
In 2013, I resolve to make use of more of my jars.

Preheat your oven to 400 degrees. Drizzle the olive oil on the fennel, season with the dashes and tastes. Roast for 30 minutes. Once they’re done, dice the pieces.

Toss all the ingredients in a food process. Process! Don’t over-process or it’ll become tapenade mush and no one like tapenade mush…as much as tapenade.

this is what it looks like when tapenade makes love to the camera.
fucking nature, man. beautiful.

Bring your water to a boil in a small pot. Slowly add the polenta and the seasonings and stir, stir, stir for like 15 minutes or so. Once it’s thickened, transfer it to a cookie sheet or some dish and press it evenly into the pan. Let it sit until it sets.

I used a mini jar to cut my polenta circles but a cookie cutter would be 1000 times smarter. So do that. Make some polenta disks, put them on the cucumber slices, top with about 10g (a heaping amount, in other words) of tapenade. Add whatever additional toppings you desire. Finish with a sprig of parsley for fancy-pants-ness.

You have a question? Weird! I have an email account! 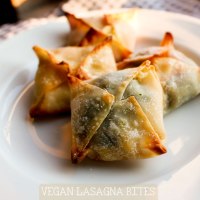 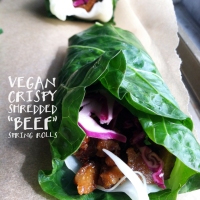 Rantings of an Amateur Chef

Where the belly rules the mind!

One bite is never good enough

an all vegan pop-up market